What ever happened to the Easter People? 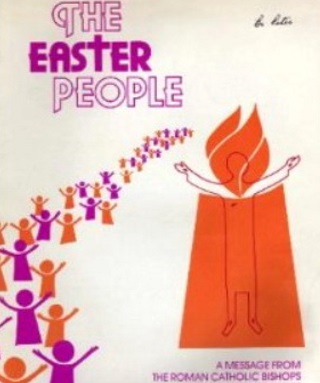 It all seems a long time ago, mainly because it is, forty one years in fact, since some 2000 people gathered in Liverpool for the National Pastoral Congress. The Report that emerged was given the title of ‘The Easter People’. The cover image of a stream of people with hands uplifted in praise, is one that I have used in many ways in subsequent years, both in school, parish and various leaflets.

They were days of hope and renewal, an inspiration for the Church in England that, by an open sharing, by discussion and exchange we might continue to explore and develop the insights to faith offered by Vatican II.

Sadly, it was not to be, for within three years or so, its formative influence was fading, the urgency was lost. The inspired direction by Cardinal Hume of Westminster and Archbishop Worlock of Liverpool, both before and after the Congress, came face to face with the early years of the John-Paul II papacy and the chance was gone.

What would have been the consequences for the laity in this island, off the north-west coast of Europe, if it had been taken further? I would suggest that the contribution we might have made has been greatly diminished. Those who have voiced a considered opinion over subsequent years have often been regarded as a troublesome irritant both at diocesan and parish levels.

We might ask how many of our diocesan bishops have a lay pastoral council, where views might be exchanged and opinions offered? The route however, in most cases, is only one way. We hear from our bishops in measured tones when a ‘pastoral letter’ is issued, ‘to be read etc…’ but never have the opportunity to respond. Occasionally it will be printed for distribution in the parish, but that is not normal practice. So words of wisdom are offered, we sit and listen but can say nothing in response and often forget them by the end of mass.

At the same time it might be pertinent to ask about the regular meetings of the Bishop’s National Conference. Not only have the laity no knowledge of their Agenda, they equally have no way of knowing outcomes until it is decided by a small select group to release a word or two. Why can’t at least a summary minute be posted on diocesan websites?  There really must be some way that the lay voice can contribute in a meaningful and positive way to discussions that do, after all, involve us? Diocesan councils would help enormously.

We should of course be able to take it up for discussion at the next meeting of our parish council, that gathering of good women and men who come together to help maintain the active mission of a pilgrim church. Trouble is that many parishes do not have such a Council, the forward planning, the exploration of faith is left in the safe hands of the parish priest in whose implicit right judgement we must place our trust. And all this after the National Congress in 1980 gave such hope to lay involvement, how sad, what a loss.

If the Church has problems and then people, all of us who are the Church, have a contribution to make at both parish and diocesan level. Those who participate in finding solutions after carefully exploring the issues are far more likely to accept and implement the resultant conclusion.

Either we arrange our discussion in a careful and positive manner with due respect for each and everyone concerned or we gnaw at issues in a narrow, and in the end, non-productive way that only serves to antagonise many people

In the years since Liverpool, the inspiration for dialogue and renewal has come from informal groups of laity who in their own time and through their own initiative have asked the questions, sought answers and attempted discussion with our priests and bishops in good faith. Mostly, to no avail.

Yet in the years of the papacy of Francis, a continual theme has been that of sharing, of people taking responsibility rather than following without question the direction of the next one up the ladder.

Our laity has, in so many instances, gained from the experience of tertiary education in recent years. They have access to documents through the Net, they are widely read in both secular and spiritual matters and through such a background, they have the ability to hold a cogent, informed discussion.

The world we live in has changed. Either we respond to that change in a purposeful and sincere manner or we will experience the consequence of our failure to meet the challenge.

W H Auden concluded a poem, written in October 1940, with these words: “time tells you nothing but I told you so.” I would suggest that time is short.

Now we are in the preparatory stages of an international synod, the most significant gathering since the Council of the Vatican in the early 60s so it is right to ask the question. How will this discussion take place, who will speak and who will be listening?