An intimate act of love 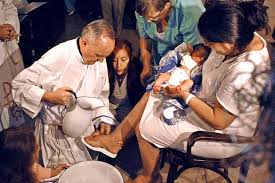 We are in the middle of Holy Week, and tomorrow, Holy Thursday, we celebrate the Mass of the Lord’s Supper, remembering that first occasion when the Paschal meal was shared by the Lord with those gathered in the Upper Room.Here in a community meal he showed us his way of giving thanks to the Father - 'eucharist' - and assured us that sharing in this meal was a participation in his life, death, and resurrection - and that it would be the food that would give us strength for our journey of discipleship.

An ominous day in many ways, those last hours before the walk to Gethsemane, out across the Kedron River, yet a time of true significance.

We are also told that he knelt and washed the feet of those who shared the meal with him. This ritual of washing feet made its modern appearance with the reform of the Easter Liturgy in 1956.

It had not been seen since the Middle Ages.

From the time when Canons of the cathedral washed the feet of beggars, through to the substitution of a gift of money instead of washing (still preserved in the UK when the sovereign hands out the “Maundy Money” to pensioners, their number matching the years of her reign) to the Rite we now use on Holy Thursday, our appreciation of this action has become somewhat blurred.

The Washing of Feet is an action of gentle kindness, an act of service and an intimate act of love. I received this email recently from a member of the Call to Action group here in UK. I think is says so much about what should be our real understanding of the Lord’s gesture.

“I took part in a retreat lead by Jean Vanier at Trosly last October. He is an inspiration. In his book: Becoming Human, which I recommend, he says: "Community life with men and women who have intellectual disabilities has taught me a great deal about what it means to be human."

Towards the end of the retreat we sat in small circles of about eight people and washed the feet of the person next to us. As it worked out the youngest person at the retreat had her feet washed by Jean. It was a beautiful ceremony. Jean based the retreat on John's gospel”.

This was not a pre-selected group of men, but a gathering of those who had shared community with each other, women and men, young and old. Unfortunately our translation of “viri” has led us to understand that  this action is restricted to a re-enactment of Jesus washing the feet of the twelve, rather than a significant sign of love within a community. The heading photograph of Papa Francesco when he was Archbishop in Buenos Aires is direct and offers a fine example of inclusive love. The rejection of women from such an occasion could be seen as hurtful, another exclusion from the life of the Church, where the actions of men dominate. Tom O’Loughlin (details are quoted below) goes so far as to say “…if it is a choice between excluding women and dropping the action, then it is better to drop the event lest it be a counter-symbol”

That would be a pity. Maybe another instance where we have to think through the significance of our gestures within the context of our appreciation of gender issues.

For a fuller exposition of the understanding of footwashing see

Tom O’Loughlin is professor of Historical Theology at the University of Nottingham, England