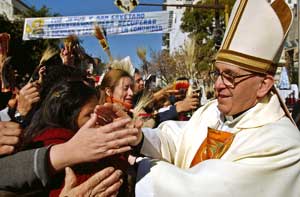 I have told my priests: «Do everything you should, you know your duties as ministers, take your responsibilities and then leave the door open». Our sociologists of religion tell us that the influence of a parish has a radius of six hundred meters. In Buenos Aires there are about two thousand meters between one parish and the next. So I then told the priests: «If you can, rent a garage and, if you find some willing layman, let him go there! Let him be with those people a bit, do a little catechesis and even give communion if they ask him». A parish priest said to me: «But Father, if we do this the people then won’t come to church». «But why?» I asked him: «Do they come to mass now?» «No», he answered. And so! Coming out of oneself is also coming out from the fenced garden of one’s own convictions, considered irremovable, if they risk becoming an obstacle, if they close the horizon that is also of God.