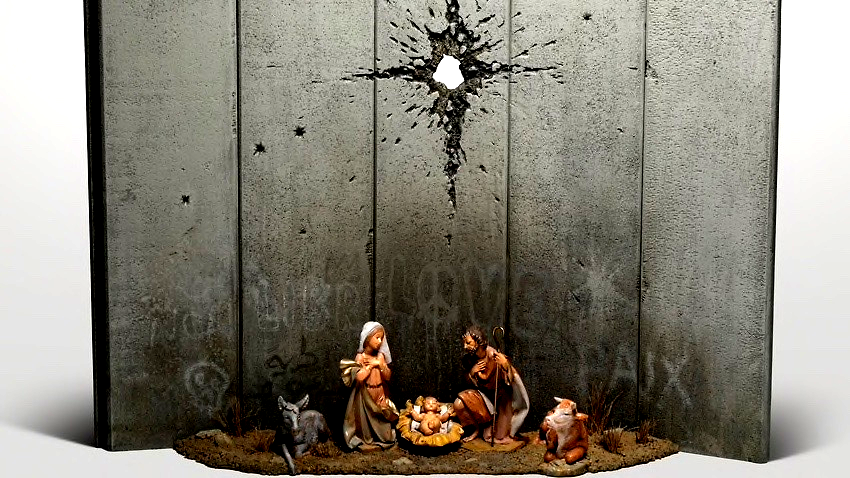 Every so often we are advised to have our eyes checked at the local opticians. Our sight is precious. With good, clear sight we are often said to have 20-20 vision. This New Year matches that tag. What sort of vision have we got for the coming months of 2020? Our decorations have been put away for another year, the crib figures are put back in their box for safe keeping. The tinsel and treasures are returned to the loft. Some of you may have seen the contribution made this year by Bansky, a western Graffiti street artist. Little is known about him, apart from his stunning work.  Every so often a new piece appears. His latest offering – his take on a nativity scene – was unveiled before Christmas at a hotel in Bethlehem.

The Scar of Bethlehem featured a traditional nativity scene, with figures of Mary and Joseph and the baby Jesus, but instead of a star hanging in the night sky over the crib there is what appears to be a large shell hole piercing an imposing grey wall.

The piece has appeared in the Walled Off Hotel in Bethlehem which Banksy helped set up and overlooks the border wall in that divided city. Opened two years ago, the hotel is billed as having “the worst view of any hotel in the world” “Love” and “Peace” are respectively tagged in English and French on the installation’s concrete blocks.

Street art is a powerful expression of political opinion around the world. The colourful favelas in Rio, the poor slum quarters of the city, express the feelings, struggles and lives of the people.

Closer to home, gable-end images that can still be seen in the towns of Northern Ireland are a poignant reminder of the recent thirty years of conflict that are so often simply referred to as ‘the Troubles’. The icons of green and orange remain. Pictures of the Berlin Wall separating East from West before its removal in 1989 with the collapse of the Iron Curtain, show the side facing West Berlin covered with a wide variety of colour-sprayed images and words rejecting the division of that city.

The wall that divides the city of Bethlehem-whose name in Hebrew בֵּית לֶחֶם Bet Leḥem, meaning "House of Bread"-is part of the wall that now separates the state of Israel from the Palestinian peoples.

Walls divide peoples, they keep us apart from those who threaten security. They also divide families, those who live or work on one side or the other. Bansky has shown us a traditional crib scene that is in stark relief to the image of the pierced wall, where the star that hovered over the city, the star that guided the Wise Men has become the scar of a shell hole.

By the end of this year the citizens of the United States will have elected a President for the next four years, a new face in the Oval Office or more of the same. However before that Election Day there is the small matter of an impeachment trial, to be held in the Senate, of the present incumbent. It also happens to be the 400th anniversary of the establishment of the Plymouth Colony in 1620.

Closer to home the consequences of our country’s decision to leave the European Community will become clearer; January 31st is now only three weeks away. We will find out through hard experience as the year wears on the costs and benefits of a referendum result from four years ago.

Populist politics are creating a wedge of wind between nations and peoples, giving rise to an ache that can chill the body to the bone, fracturing pond-ice, laced with leaves broken by fallen stones. The belief that smaller and smaller groups are better, where identity, language and appearance determine membership

may well have unfortunate consequences.

We should be prepared to create larger societies where difference is not only tolerated but positively celebrated. The alternative is a dangerous pressure cooker of alternative options, where selfishness and greed prosper and suffering is the end result.

The Summer Olympic Games will be held in Japan and it presently seems possible that Liverpool will at last win the Premiership. There will be birthdays and weddings and joyous family occasions to mark as months go by. At least there is some sunshine to look forward to in a troubled world.

Hope, purpose and promise should permeate the lives of Christian peoples. Our hope is sustained in our faith, our purpose defined by our baptism as we live out the promise of the Incarnation of God in the Christ-Child, taken one step at a time. As we begin a New Year so may we see the removal of the many walls, both real and figurative, that still divide us.