Written by Chris McDonnell
Published: 28 May 2013 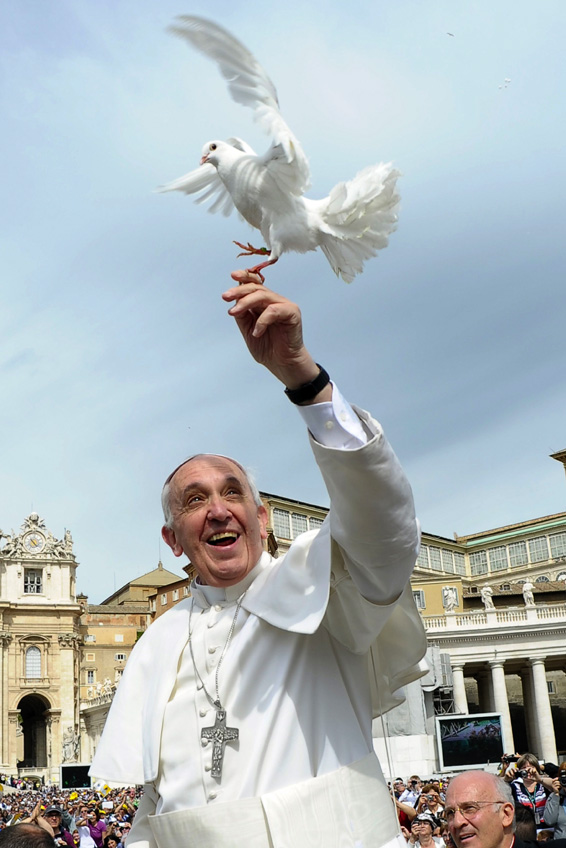 The Season of Easter is at an end. The Liturgy of the Hours concludes with three words on Pentecost Sunday evening  - “ So Eastertide ends”.

With Trinity Sunday and the coming weeks we enter that period, rather strangely called “Ordinary Time”, a space that takes us through the Summer and Autumn in the Northern hemisphere to the beginning of  the Season of Advent in the first days of Winter.

I have often wondered why we use the word ‘ordinary’, as though  these coming weeks are somehow humdrum and boring when they are in fact a time of freedom joy and adventure reflecting those days in the early Christian Communities when the Spirit fired the lives of the Apostles and their friends.

The dove, being released by Papa Francesco, is gaining again the freedom of the skies and there is immense joy on the face of Francis that he is giving the dove its liberty.

Each one of us who profess the Risen Christ have that freedom of the Spirit who now lives in us, freedom to act, to pray and to share the gift that is given us. And with that Spirit comes responsibility to be honest with each other, to care for each other and to give voice to the issues of conscience that beset our times.

It is wrong to assume that asking questions, seeking solutions, challenging the status quo, is an act of disloyalty; in many instances it is exactly the opposite. Those who have shown such honesty have been too easily dismissed when they have voiced an opinion.

Hans Kung, in his recent article published in the Tablet (May11) “Don’t let Spring turn to Winter” raises important comparisons about Francis and his namesake. He concludes his article with these words.

“We should then in no way fall into resigned acceptance. Instead, faced with a lack of impulse towards reform from the hierarchy, we must take the offensive, pressing for reform from the bottom up. If Pope Francis tackles reforms, he will find he has the wide approval of people far beyond the Catholic Church. However, if he allows things to continue as they are, without clearing the log-jam of reforms now in progress, such as that of the Leadership Conference of Women Religious, then the call of “Time for outrage! Indignez-vous!” will ring out more and more in the Catholic Church, provoking reforms from the bottom up”.

That is a significant comment, not lightly made, for it asks, in the spirit of collegiality, that the voice of those seeking the urgently needed reform should be listened to and their views respected.

No time is in fact ‘ordinary time’, all time is a time of pilgrimage, a time when we are challenged in our belief and practice, all time is a time of the Spirit. Those two men we heard about a few weeks back, walking the road from Jerusalem to Emmaus, recognised the Lord in the breaking of bread, having had their hearts stirred during the journey with the Lord.

The Spirit of Pentecost is within us as we walk our journey, offering us strength as we ask courageous questions.