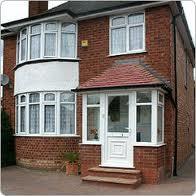 The house opposite my home has been vandalised; why, I do not know. When I first came to live in these parts, some years ago, the then owner of that house was in the process of building a porch to protect the front entrance from the elements. He was a big, strong, muscular man, who seemed to enjoy “seeing to things". He looked after his garden too in a care-taking kind of way. His wife, a neat little woman, had a face that betrayed long hours on the sun bed. There were no children, or if there were they had long since fled the nest and showed no desire to return. There came a parting of the ways. He left without so much as a wave; she crossed over to tell me it was all his fault. I might have believed her too were it not for the cheery smile on her face as she spoke to me and the spring in her step as she sat in beside the gloomy looking stranger in his BMW.

The house was empty for a time after that, and then a young couple arrived: arrived, and also departed. Scarcely had they begun to drag their things inside, than a dreadful screaming broke out. A day or two later the young man began the work of dismantling the porch, and I began to wonder if, since it’s building had once heralded my arrival, might not it’s dismantling be the sign that it was time for me to go. I was so distracted with this fearful thought that it was some days before I noticed that I had not noticed the young lady. It turned out that she had come, seen and gone. The young man continued to busy himself in the demolition business, but one could not help noticing that his work was frequently interrupted by visiting strangers. Eventually some official types arrived and affixed a large white notice to the inside of a downstairs window. The young man left that very same day and I have not seen him since. I have had it in mind to cross the road and read that large white notice, but the house is on a busy corner, and I can’t summon up the courage to risk being thought nosey, or common. Perhaps some morning very early, but no, perhaps not.

Where the vandals came from I do not know and, given the amount of breaking glass there has been, I am surprised that I heard nothing. Perhaps it was an inside job. It is the ambition of every house after all, to provide someone with a good home. The great spirits of joy and welcome, love and forgiveness that lie waiting to be brought to life in the fabric of every house, may have flung themselves about in a fit of furious resentment at what might have been. I do not find the thought too fanciful, do you?

Quite the opposite, for recently as I look across at the lace curtain blowing forlornly in the breeze, I have found myself wondering about the first people to live in that house. I imagine them as a youngish couple, proudly taking possession of it and determined to make it their home. I think too of those who followed them, who moved in with their own dreams of a happy life, and who had moved on before ever I turned up. Perhaps we all carry around with us the seeds of a self - destructive vandalism, which, if we are not very careful, scuppers the best laid plans, undoes the fondest hopes. The more I see that lace curtain flapping out into the street, the more I find myself thinking of such a possibility. Does the sad neglect that has now overtaken the house, in some way reflect the lives of all who once lived there? You might think this a mere speculation, but the odd thing is that I find myself caring. My heart wants to know what became of them all, how they all are.

Oh, I know that the situation will be resolved one of these days. New people will move in and set about arranging things to their liking. They may even stumble upon the idea of building a porch to shield their front door from the storm. But there is no porch to shield us from storms that come from within, they need no point of entry. Such storms can assail us at any time and the humble acceptance of this fact may be the first steps to another kind of caring, the sort no watching neighbour will ever notice.